Luciano Valentino thrilled to be drafted by HFX 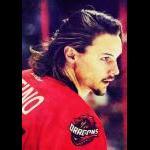