Omi Aberg and Vancouver Wolves start of the season 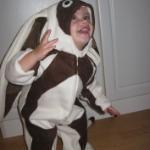