Something to Do during the Non Super Cup/WC Season 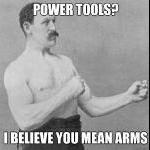